Snowflower and the Secret Fan - By Lisa See 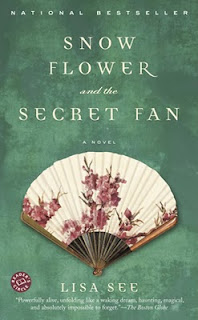 SNOW FLOWER and the SECRET FAN: From the Author of Peony in love.  These two books cover the difficulties of Chinese women in the 19th and 17th Century respectively.
AUTHOR: Lisa See
BEST SELLERS: The other works of the Author include On Gold Mountain, Flower Net, The Interior, Dragon Bones and Shanghai Girls.
SYNOPSIS: Lily, the protagonist, an 80 year old woman, relives her life of past, the memories and the culture she followed with her lao tang (Sworn Sister) in the 19th Century China. Those were the dark times, when the feet of the women were bound* to look like a golden water lily (no longer than 7 inches) to make them eligible to be married off well. Lisa's novel covers the story of two women, bound by the relationship of love, betrayal and growing up. Snow flower is Lily's match (They become 'Old Sames' at the age of Seven) and the novel covers their opposite lives. Secret Fan, a silk folding fan was a means for communication, which they used by inventing their own writing styles called nu shu (Women's writing - delicate and sharp) in a small town called Hunan, when women were completely secluded from the outside world.
EXCERPT: "The binding altered not only my feet but my whole character, and in a strange way I feel as though that process continued through my life, changing me from a yielding child to a determined girl, then from a young woman who would follow without question whatever her in-laws demanded of her to the highest-ranked woman in the country who enforced strict village rules and customs. By the time I was forty, the rigidity of my foot-binding had moved from my golden lilies to my heart , which held on to injustices and grievances so strongly that I could no longer forgive those I loved and who loved me. My only rebellion came in the form of nu shu, our women's secret writing. My first break with tradition came when Snow Flower--my laotong, my "old same," my secret-writing partner - sent me the fan that sits here on my table, and then again after I met her." - Lily
MSM SPEAKS: Before I decided to read this book, I had a big mental block that I cannot read novels based on historical and cultural events as they remind me too much of History Text books. The one book which I had loved in the Literary fiction category was Memoirs of a Geisha - which covered the lives of Japanese Geisha beautifully, but that was the only one. The SNOW FLOWER and the SECRET FAN was suggested to me by a friend who is quite knowledgeable when it comes to stuff like this. She told me about this concept of Foot Binding in China where women's feet were wrapped and bound in bandages so that the bones in the feet would break and then shaped like folded water lilies. It was a horrible culture and many young girls died because of it. I decided to give this one, a read.
SNOW FLOWER and the SECRET FAN deals with the most mysterious of all relations - female friendship. It marks the brilliant journey of two girls who go through the process of foot binding together, once their stars are matched (like matching horoscopes). Lily describes her relation with Snow Flower as that of similar to husband and wife, like two mandarin ducks, where love in its purest form is involved. It is a window to a whole different culture and also describes the difference that develops between them when they are married. Lily is married to the highest ranked family of China while Snow Flower is married to a Butcher. Lily's thought process become marginalized and the value of the Secret fan is lost in her eyes, for Snow Flower does not confirm to the norms of the society. The Novel covers the story in a narrative style by Lily and how she regrets everything she had done in past.
If MSM can read this, anyone can. And I would strongly recommend everyone to go through SNOW FLOWER and the SECRET FAN once. Even Men. When I told FL that I was reading this serious book, he laughed :P which shows that this book isn't heavy on the brain. Lisa See writes the pages very simply and delicately, unfolding the nuances of Old Chinese Culture, beautifully. I read it as an outsider, observer, watching every single scene play out before my eyes, even though I had no freakin' idea about the Old (or even new, contemporary etc.) Chinese Culture.
My rating: 4.5/5 for the sheer brilliance of writing an emotionally electrifying historical fiction novel.
SNOW FLOWER and the SECRET FAN: Random House Trade 2005 ISBN 13 9780812968064
Landmark Bookstore, Online Price (Paperback) - 709/- INR
Pages - 269
HERE is the link to e-book. Happy Reading!
Posted by Wings of Harmony at September 24, 2011
Email ThisBlogThis!Share to TwitterShare to FacebookShare to Pinterest
Labels: Chinese Culture, Historical Fiction, Lisa See, MSM