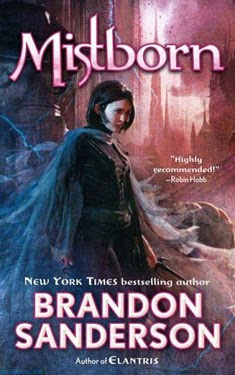 Book 1 of the 'Mistborn' Trilogy

SYNOPSIS - Once, a hero rose to save the world. A young man with a mysterious heritage courageously challenged the darkness that strangled the land.

For a thousand years since, the world has been a wasteland of ash and mist ruled by the immortal emperor known as Lord Ruler. Every revolt has failed miserably.

Yet somehow, hope survives. Hope that dares to dream of ending the empire and even the Lord Ruler himself. A new kind of uprising is being planned, one built around the ultimate caper, one that depends on the cunning of a brilliant criminal mastermind and the determination of an unlikely heroine, a street urchin who must learn to master Allomancy, the power of a mistborn.

EXCERPT - Sometimes, I worry that I'm not the hero everyone thinks I am.

The philosophers assure that this is the time, that the signs have been met. But i still wonder if they have the wrong man. So many people depend on me. They say I will hold the future of the entire world on my arms.

What would they think if they knew that their champion - the Hero of Ages, their savior - doubted himself? Perhaps they wouldn't be shocked at all. In a way, this is what worries me the most. Maybe, in their hearts, they wonder - just as I do.

When they see me, do they see a liar?

FL Speaks - Brandon Sanderson, i bow to thee. I picked this trilogy after a huge number of fantasy enthusiasts recommended it on goodreads. And oh boy, this is one of the best trilogies ever. Ever. Mistborn doesn't disappoint. Not even once. Not even for one page.

Mistborn is the story of a man called Kelsier and his group of thieves. Loyal and passionate to a cause, these people with certain gifts are the only hope of the oppressed skaa people. Together they plan and fail and plan again, because, if they fail, hope fails. They take the fight to the Lord Ruler, knowing fully well that its their doom. Yet, they do it, because the skaa need a reason to believe. The skaa need a hope to rise up. And when the tale of courage and power and magic meets the truth and treachery, the entire world hangs in balance.

Mistborns are those rare people who use metals for their powers. They swallow it and burn them in their stomach to do as they will. Depending on the metal, they can attack, run, fly, hide and do much more. Not all people are mistborn. Most of the people are the normal skaa's who are oppressed by noble families in the name of the Lord Ruler. Some of them are Mistings, people with control of just one metal and a very few of them are true Mistborns.
Enter the survivor of Hathsin, Kelsier.  The former thieving crew-leader brings up a daring plan to challenge the Lord Ruler. He and his friends search out Vin, a young girl of sixteen who showed signs of being a Mistborn. Vin, infiltrates the noble families as they attempt to create an all-out war between the families.
Every chapter starts with a mini paragraph of a diary entry by a person. You soon begin to realize that those are the notes of the hero who once rose to save the world. What led him to become the Lord Ruler they despised? What made the hero of people become a tyrant? That and much more is what makes this book a truly spectacular tale. You will love them, pity them, share their laughs and weep at the tragedies.
The truth is much more harsh and their struggle for freedom has unseen consequences. Brandon Sanderson is a master storyteller. A MUST READ!
My Rating - 5 stars
E-book link - HERE
PRICE - INR 282/- from Tor Publications (Flipkart price)
Posted by Freelancer at September 20, 2011
Email ThisBlogThis!Share to TwitterShare to FacebookShare to Pinterest
Labels: Brandon Sanderson, Fantasy, Freelancer, Trilogy - Mistborn