The Immortals of MELUHA- Amish 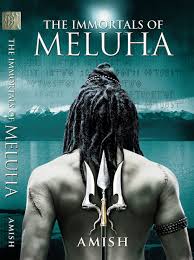 Author : Amish
Best Sellers : Immortals of Meluha, Secret of Nagas
Synopsis:
STORY OF A THE MAN, WHOM LEGEND TURNED INTO A GOD.
1900 B.C, in what modern Indians mistakenly call the Indus Valley Civilisation.
The inhabitants of that period called it the land of Meluha - a near perfect empire created many centuries earlier by Lord Ram, one of the greatest monarchs that ever lived.
This once proud empire and its Suryavanshi rulers face severe perils as its primary river, the revered Saraswati, is slowly drying to extinction. They also face devastating terrorist attacks from the east, the land of the Chandravanshis. To make matters worse, the Chandravanshis appear to have allied with the Nagas, an ostracised and sinister race of deformed humans with astonishing martial skills.
The only hope for the Suryavanshis is an ancient legend :
'When the evil reaches epic proportions, when all seems lost, when it appears that your enemies have triumphed, a hero will emerge.'
Is the rough- hewn Tibetan immigrant Shiva, really that hero?
And does he want to be that hero at all?
Drawn suddenly to his destiny, by duty as well as by love, will Shiva lead the Suryavanshi vengeance and destroy evil?
This is the first book in a triology on Shiva, the simple man whose karma re-cast him as our Mahadev, the God of Gods.
Excerpts:
As Daksha spoke once again, Shiva refocused his attention on him.
"The problem we are facing were prophesied, my Lord,' continued Daksha. "Lord Ram himself said that any philosophy, no matter how perfect, works only for a finite period. That is the law of nature and cannot be avoided. But what the legends also tell us that when the problems become insurmountable for ordinary men, the Neelkanth will appear. And that he will destroy the evil Chandravanshis and restore the forces of good. My Lord, you are the Neelkanth. You can save us. You can complete the unfinished task of Lord Ram. You must lead us and help us defeat the Chandravanshis. You must rally the Swadweepans around to the side of good. Otherwise I fear this beautiful country that we have, the near perfect society of Meluha, will be destroyed in years of endless war. Will you help us my Lord? Will you lead us?"
Shiva was confused. "But I didn't understand, your Highness? What exactly would I do?
"I don't know my Lord. We only know our destination and that you will be our leader. The path we take is up to you."
They want me to destroy the entire way of life of eighty million people by myself! Are they mad?
Maithili Speaks:
Shiva Triology! One would expect a mythological saga with lots of respect and Oh Lord stuff.. But wait a mintue, this book will take you by surprise. Yes, after a long time an Indian writer creates a definite page turner.
This story is about Shiva. The writer has given birth to a brilliant concept. The rise of a man to the stature of a Mahadev just because of his valor and karma.
The story so brilliantly weaved and presented that it almost is relevant to the current day problems! If you are anywhere close to being a mythological literate (yes I can say that I have been passed a fair share of my quota from the word of mouth through generations) you will be awed in the way the characters and their human ways in which they have been presented.
So the first part is basically about the eternal balance of good and bad which is perceived as being that between Suryavanshis (the followers of the solar calender) and the Chandravanshis (the followers of the lunar system).
The Meluhans have this legend that a man not from Sapt- Sindhu will emerge amongst them, whose throat will turn blue of drinking the Somras and he will be the Neelkanth- their savior!
Shiva, a tribal leader finds his throat turn blue and suddenly he is the much revered Neelkanth! How he rises to fulfil his destiny is what this story is all about..
Also a very pleasant part of this story, is the love story between Shiva and Sati (better known as Parvati). There are moments so heart warming, loving and mischievous that you smile (I have grinned like an idiot while reading this in train) with the pleasure of it ! Ah sweet love!
Ratings: 4.5 on 5.. that is because the story left at to be continued at a crucial point!!
Price: Rs 295/- although you might get it at Crossword discount for only Rs 100/-
Posted by maithili at September 23, 2011
Email ThisBlogThis!Share to TwitterShare to FacebookShare to Pinterest
Labels: Amish, Fiction, Maithili, Trilogy - Shiva