The Hero of Ages - Brandon Sanderson 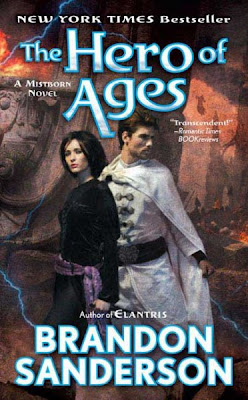 THE HERO OF AGES

SYNOPSIS - Killing the Lord Ruler to end the Final Empire was obviously the right thing to do, wasn't it? With the return of the lethal form of the ubiquitious mists, increasingly heavy ashfalls, and even more powerful earthquakes, Vin and Elend are no longer sure. Long ago, Ruin - one of the primal beings who created the world - was promised the eventual right to destroy all things. Now that Vin has been tricked into releasing him from the Well of Ascension, Ruin apparently intends to collect.

EXCERPT - MARSH STRUGGLED TO KILL HIMSELF.

His hand trembled as he tried to summon the strength to make himself reach up and pull the spike from his back and end his monstrous life. He had given up on trying to break free. Three years. Three years as an Inquisitor. Three years imprisoned in his own thoughts. Those years had proven there was no escape. Even now, his mind clouded.

And then, It took control.

The concluding part of the trilogy reveals that and much more. Revelations, connections and surprises, flow in a torrent of pages and it all leads to a stunning finale no one guessed about. Yes, we all know, they live happily ever after or the end of the world is postponed by some means. What we never guessed was the price they had to pay for it.

Vin and Elend gather their forces and march to secure Cett's kingdom where a cache of food or weapons are held. They already found a few and that was the last one they needed to control to prepare for the end of the world. Vin is still on the lookout for the atium that was hidden by the Lord Ruler since she believes that it will be a great weapon when they finally face the real foe. Meanwhile Ruin reveals his identity and proceeds to misguide people for his evil purposes. Even with the volatile Koloss army at their disposal, it looked like it was too less to face off against an evil that was far to strong and far too evil. The mists continue to kill people and Vin and Elend do not have the time to fight three wars at once.
Elend finally behaves like a ruler. He actually commands! And the best thing is, people actually love him. Gone are those days when he used to worry about every trifle thing. Gone are the times when he had Vin to save his skin. She still stays, but the shocker was that Elend Venture, Emperor, is now a Mistborn.
And you actually feel pity for the dead Lord Ruler. He did everything in his power to stop Ruin and dear ol' Vin, like a silly girl she is sometimes, let him/it free. Twists and turns make you go crazy with this book and you want to finish it as fast as possible and yet do not want the story to end. Some exciting moments that really grip you is the dance of Elend and Vin straight in the middle of the enemy's ball room they have came to conquer. This book belongs as much to Elend as it is to Vin. Not to mention Spook walking Kelsier's path.

The last 100 pages are totally gripping with fear, loyalty, courage, strength and honor at the face of death. Of all the entire crew of Kelsier's from the first 2 books, only a few survive the aftermath. All the hard work threatened to come undone when they realized Ruin was manipulating the ones Vin and Elend trusted. With nowhere to go and no one to help them, Vin and Elend with an unlikely group of newly born Allomancers,charge for a final assault with the hope that somehow everything will be alright again.

My Rating - 5 stars
E-Book Link - The Hero of Ages