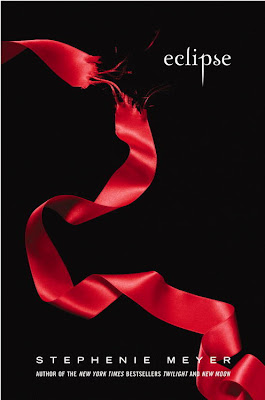 Synopsis- As Seattle is ravaged by a string of mysterious killings and a malicious vampire continues her quest for revenge, Bella once again finds herself surrounded by danger. In the midst of it all, she is forced to choose between her love for Edward and her friendship with Jacob - knowing that her decision has the potential to ignite the ageless struggle between vampire and werewolf. With her graduation approaching, Bella has one more decision to make:life or death. but which is which?

Excerpt- ALL OUR ATTEMPTS AT SUBTERFUGE HAD BEEN IN VAIN.
With ice in my heart, I watched him prepare to defend me. His intense concentration
betrayed no hint of doubt, though he was outnumbered. I knew that we could expect no help
at this moment, his family was fighting for their lives just as surely as he was for ours.


Would I ever learn the outcome of that other fight? Find out who the winners and the losers
were? Would I live long enough for that?

The odds of that didn't look so great.

Black eyes, wild with their fierce craving for my death, watched for the moment when my
protector's attention would be diverted. The moment when I would surely die.

Somewhere, far, far away in the cold forest, a wolf howled.
Ria speaks- I must admit the Preface of each novel in the saga is what kept the faith alive in me that the book in my hands still has the promise of a good read. Not to get too much into the whole love triangle which somehow seems to remain omnipresent through out the book. Jacob still loves Bella- Bella still loves Edward- Edward still wants to kill Jacob(for loving Bella & for being a werewolf). This book brings in the new twist of brand new vampires, it shows us everything Edward(and the whole Cullen family) has talked about. Stephenie Meyer tries to give us as big a insight as she can into the minds of the "newly born's" helping us imagine what Bella(if she turned) would be like.
Now as we can't run from the whole romance thing as i thought i could and so did Bella( both clearly mistaken), Jacob pounces on the opportunity to save and spend more time with Bella from the newly born's which seem to be coming after her. He finally makes a move and kisses Bella only to get punched in the face by her(her hand breaks but i'm sure it was worth it). Now i read all 4 books before the movie's came out so when i speak of the Cullen family, or the werewolves or even Bella its the picture i formed in my head not the one that was formed for me. That is the beauty of these books it allows your imagination to run wild, be it from the blood thirsty newly born's to the evil genius of the Volturi, throw in a marriage proposal, talk about sex and a scorned love and we have all the makings of a hit story.
Like her previous books the third book did not fail me, it just had me more in love(when i din't think it possible)
Ratings- 4 out of 5( i stick by my ratings)
Price- Rs 395. Rs 277 on Flipkart.
Posted by Ria Dhanda at September 29, 2011
Email ThisBlogThis!Share to TwitterShare to FacebookShare to Pinterest
Labels: Ria Dhanda, Stephenie Meyer, Twilight, Twilight Saga, vampire