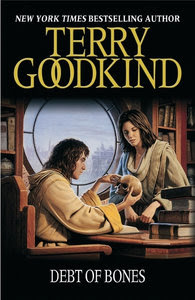 DEBT OF BONES
a novella

Book 0 of the 'Sword of Truth' series

SYNOPSIS - A milestone of storytelling set in the world of THE SWORD OF TRUTH, Debt of Bones is the story of young Abby's struggle to win and aid of the wizard Zedd Zorander, the most important man alive.

Abby is trapped, not only between both sides of the war, but in a mortal conflict between two powerful men. For Zedd, who commands power most men can only imagine, granting Abby's request would mean forsaking his sacred duty. With the storm of the final battle about to break, both Abby and Zed are caught in a desperate fight to save the life of a child....but neither can escape the shadow of an ancient betrayal.

With time running out, their only choice may be a debt of bones. The world - for Zedd, for Abby, for everyone - will never again be the same.

EXCERPT - Abby's attention was snagged by a form in white to the side. Abby had never seen the women before, but without doubt knew who she was. There could be no mistaking this woman. Only one of them wore the white dress.

It was the Mother Confessor herself.

She heard muttering above her, but feared to listen, lest it was death being summoned.

FL Speaks - Disappointed. Yes, thats the word. After reading and being such a huge fan of the "sword of truth" series, reading the prequel has been nothing but a mega disappointment.

The story starts in the Midlands, where Abby, a young woman is in search of the First Wizard, Zeddicus Zul' Zorander. Zedd is portrayed as a fine, lanky man in his prime. (a refreshing change from the moody yet brilliant wizard he portrays in the later books) Debt of Bones is set in the past. The war has just begun. Panis Rahl is hell bent on capturing the Midlands and Zedd is the only one capable of stopping him.

The book reveals some of the questions we always wondered about. It shows Richard's mother, when she was still a child who was captured by the D'Harans. Abby has her own intentions for seeking out the wizard's help. Zedd is nicknamed 'the wind of death' by his enemies and 'trickster' by his friends. It remains to be seen if that is enough to save the Midlands and his daughter as well as finish the threat of Panis Rahl and yet come out alive.

One question that we all wondered about in the SOT series is finally answered. How did the boundary come up?? The answer to that is revealed. Although i would have loved to know more about how Zedd risked his skin to bring the baby Richard to the Westlands, apparently that will not be answered here.

I would suggest reading the SOT series in the publishing order starting with "Wizard's First Rule" and not in chronological order. Seriously, if you read this novella first, the joy of reading Richard's story is not going to sound appealing at all.