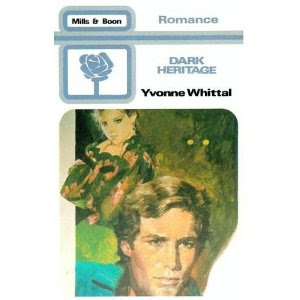 NAME OF THE AUTHOR: Yvonne Whittal

Her parents’ deaths had left Dale alone in the world, which was why Rick Crawford had been appointed as her guardian until she came of age. So perhaps it was just loneliness that made her turn to Rick- and inevitably, to fall in love with him. But what would he want with a little nobody like her, when he already had the beautiful Melissa Arnell?

And even if Dale had been more attractive, would Rick ever want to get involved with her? For he was the only other person is the world who knew her dark secret…

‘Let’s get one thing straight before we go in,’ he said in a clipped voice, and clutching her hands nervously behind her back, she raised her wide blue eyes to his once more. ‘I like my comforts, as you can see, and I like my home run on well-oiled wheels. If I’d thought that your coming here would disrupt my life in any way, then I would never have suggested it. Do I make myself clear?’

Dale shrank inwardly as she stared up at this tall, lean man before her. ‘Yes, Mr. Crawford.’

‘And there’s one other thing,’ he added harshly, gripping her box of books under one arm and picking up her suitcase. ‘My name is Rick. If we’re going to live together in the same house for the next few years, then I suggest you use it.

‘Yes, Mr.- Rick,’ she stumbled nervously over his name and her cheeks went pink with embarrassment, but he had turned away from her with a mixture of boredom and impatience on his face.
‘Come on,’ he barked abruptly. ‘We’ve kept my mother waiting long enough.’


I never thought I would get around to reading another Mills and Boon- but here I am with a book review I cannot believe I am writing. (All thanks to the book reading challenge.) Even more surprisingly, I am finding it highly entertaining. Dark Heritage by Yvonne Whittal has exactly the kind of storyline one can expect from the M&B’s- stereotypical and hence, predictable. And yet, I enjoyed it. Perhaps, because I found it a nice change after a heavy dose of the unexpected. Despite the plot being nothing out of the ordinary, the simple and sometimes amusing narrative makes it a pleasant read.

Dale Palmer is a young woman of nineteen, a rather unwanted daughter of filthy rich parents who spent most of her life in a boarding school. Not very ambitious, and content with meeting her basic needs, Dale suddenly finds herself a rich woman: at her parents’ untimely deaths, she inherits a large fortune…and an awful legacy, the discovery of which leaves a terrible scar on her soul.

Terrified of harboring dreams of a happy future, Dale battles with her feelings for the very man who has been appointed her guardian- the formidable Mr. Crawford, who happens to be more than ten years elder to her. (However, a large age gap between protagonists seems to be a recurring theme in M&B’s…or so I’m told.)

Rick kind of reminds one of Mr. Darcy from Austen’s Pride and Prejudice. He might be a little too blunt for one’s liking, but he is charming and witty when he wants to be, and most importantly, he’s a man of principles. Dale has her weaknesses (especially when it comes to her relationship with Rick) but she comes across as a good human being and a talented girl who seems to be unaware of her own worth. The other characters are just as lovable, and the subtle humor in this novella keeps one amused.

The conclusion of the story is not unexpected, and the sub-plot revolving around Dale’s dark heritage is the only thing that will leave you surprised. The filmy dialogue at the end actually made me laugh out loud. But good-naturedly. Really. I enjoyed reading it, even though I do not think too highly of it. This book is something you might want to go for if you’re in the mood for romance and happy endings.