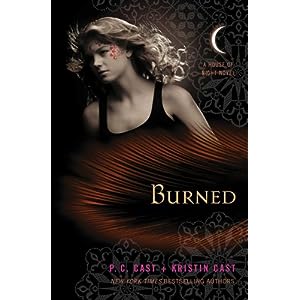 So Zoey is dead, almost dead 'cause she still has a chance at life if some one can bring her soul back from the Other world ! And who caused this ? Heath !! Am I glad he is dead finally ? In a way yes , but I liked the role he played in the Otherworld ! This book totally belongs to Stevie and Aphrodite ! Thanks to the authors for finally portraying what these two ladies are capable of !  They hve powers , they have brains and they have the strength to keep up the struggle at any cost.
Stark ! Love him from the moment he became Zoey's warrior and in this ook, he totally plays the part. Of course he is the only one who can now save Zoey and that he does. brilliant chapter that is ..[ will not tell more in case it might act as spoiler].
And yes, I hate zoey a little more here except the part when she fights for Stark ! I wish she had that sense and feeling of power all the while ! But then you will not have this part at all ;)

Synopsis:  Things have turned black at the House of Night. Zoey Redbird’s soul has shattered. With everything she’s ever stood for falling apart, and a broken heart making her want to stay in the Otherworld forever, Zoey’s fading fast. It’s seeming more and more doubtful that she will be able pull herself back together in time to rejoin her friends and set the world to rights. As the only living person who can reach her, Stark must find a way to get to her.  But how?  He will have to die to do so, the Vampyre High Council stipulates.  And then Zoey will give up for sure. There are only 7 days left…

Enter  BFF Stevie Rae.  She wants to help Z but she has massive problems of her own.  The rogue Red Fledglings are acting up, and this time not even Stevie Rae can protect them from the consequences.  Her kinda boyfriend, Dallas, is sweet but too nosy for his own good.  The truth is, Stevie Rae’s hiding a secret that might be the key to getting Zoey home but also threatens to explode her whole world.

In the middle of the whole mess is Aphrodite: ex-Fledgling, trust-fund baby, total hag from Hell (and proud of it).  She’s always been blessed (if you could call it that) with visions that can reveal the future, but now it seems Nyx has decided to speak through her with the goddess’s own voice, whether she wants it or not.  Aphrodite’s loyalty can swing a lot of different ways, but right now Zoey’s fate hangs in the balance.

Three girls… playing with fire… if they don’t watch out, everyone will get Burned.