The War of the Flowers - Tad Williams 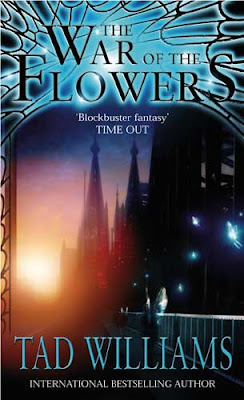 BEST-SELLERS - The 'Memory,Sorrow and Thorn' series ; The 'Otherland' series

SYNOPSIS - In the great city, in the dimly lit office of a mighty tower, two deadly creatures meet. A dark bargain is struck, and the master of the House of Hellebore gives an order: 'War is coming. The child must die.'

In our own world, a young man discovers a manuscript written by his great uncle. It seems to be a novel - a strange fairy tale of fantastic creatures and a journey to a magical realm. But it is written as a diary....as if the events were real....as if his uncle had sought and found another world.

Or as if another world had found him....

EXCERPT - "Urgh," said Applecore. She levered herself upright and peered bleerily from the folds of Rufinus' coat, then clambered slowly onto Theo's leg and up his sleeve, her wings waggling slowly. "I feel like a bugbear just shat inside my skull." From her new perch on Theo's shoulder she squinted out the rainy window at the wet country lane.

FL Speak - First of all, HAHAHAHAHAHA.... This is one of the most funniest fantasy books ever! Like ever! It all starts with this guy called Theo in the world as we know it. It begins with sadness as his wife leaves him after giving birth to a still-born in a hospital. Honestly saying, you can actually feel the pain the lad goes through when she proposes divorce. He has no job, no kid and now no wife. He moves in with his mother with whom he had barely any contact previous to his life's dilemna and within a few months, she dies of cancer. She left him the house and there he finds a diary belonging to his uncle that begins the end of his so-called normal life.

Like most skeptics, Theo hardly believes a word of the manuscript. Though he acknowledges the writing, he assumes it was a good piece of creative fiction until a half a foot fairy (sprite) by the name of Applecore appears smack right in the middle of the room he was staying! And from there, the long chase begins. zoooop! A magical doorway is summoned and voila, they were all in la-la land. Often times than not, its not very easy to transition from a modern world to a fantasy land. Tad Williams just hit the sweet spot with this book. Applecore has been a revealation. If i was a sprite, i would have married her. After one meeting. Yep.

Coming back to the story, Applecore and Theo are both chased from the mortal world to the faerie world and help is limited. The Faerie land is a brilliant piece of imagination by Williams. The land is ruled by the Flowers. Yes, that's the name of Houses of the Ruling people. There are House Hellebore, House Tulip, House Primrose and what-not. The people are fairies and sprites and goblins and troll like thingy's that are suprisingly cute and funny and harmless. Atleast the ones i encountered in this book are.

Theo realised he was summoned to this place and someone is trying to contact him while a different party wants his head. He learnt that now that he is in this world he can't go back at all. This cloak and dagger stuff makes for an awesome reading specially when Applecore is at the center. A few ruling houses take him in while the rest declares after murdering and reducing a Ruling House into ash. Theo is separated from Applecore and with the help of a friend he meets and a mysterious goblin launches a counter-attack to free Applecore while trying to keep himself alive and find the one who summoned him at the same time.

This is a must-buy for people who have just forayed into fantasy. Tad Williams in this standalone novel has created a blockbuster fantasy story. Violence that is so common in adult fantasy novels is refreshingly missing. Its the story, the conversations, the narration, the characters that give life to the world of Faerie. The ultimate twist in the tale is in the last 100 pages and i will let you readers find that out for yourself.