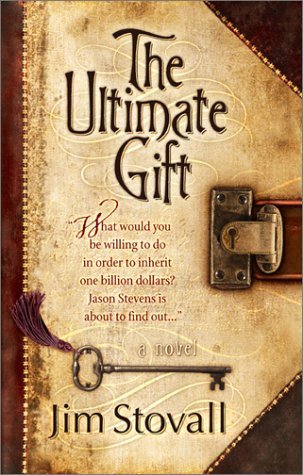 This review is of the first book of *The Ultimate series*

AUTHOR - Jim Stovall was a national champion Olympic weightlifter, investment broker and entrepreneur. He is the Co-Founder and President of the Emmy Award-winning Narrative Television Network, which makes movies and television accessible for our nation’s 13 million blind and visually impaired people and their families. He is a highly sought after author and platform speaker. His best selling book, The Ultimate Gift, is now a major motion picture.

SYNOPSIS - As the story opens a man has just died, (Red Stevens) and has left his dearest friend, the lawyer, to be the executor of his estate. To most in the family he leaves wealth with some conditions imposed. But to one young man,(Jason) Red recognizes a spark, something special, and he wishes to convey to that young man the lessons that a life of privilege have kept him from being able to learn.

According to the conditions of the will, every month for 1 year Jason must complete a task toward the ultimate gift. He is directed toward these tasks by a video his Uncle Red has left for him. Each task teaches one principal that he missed out on learning, largely due to his uncle's money.

The principles taught are as follows:
Gift of Work
Gift of Money
Gift of Friends
Gift of Learning
Gift of Problems
Gift of Family
Gift of Laughter
Gift of Dreams
Gift of Giving
Gift of Gratitude
Gift of a day
Gift of Love
The ultimate gift.

Each month Jason has to learn about these principles. I won't spoil the story by giving you the whole plot but will tell you that the discovery of these gifts take Jason on a wild and crazy journey that help him learn and internalize these principles into his own character. At the end of the year, Jason truly becomes the man that he was meant to be, and he does receive the Ultimate Gift.

“I don't know much about God or Jesus, but I can promise you His arms are meant for you!”

In the end, life lived to its fullest is its own ultimate gift.

Some people are born into wonderful families. Others have to find or create them. Being a member of a family is a priceless privilege which costs nothing but love.

It was in my fifty-third year of practicing the law, and my eightieth year of life here on this earth that I was to undertake an odyssey that would change my life forever.

The mirror to the true meaning of life, and things beyond it;

I read this book almost 2 years back while undergoing another severe treatment session for depression. Unlike other motivation books, recommended to me by my counselor, this one was actually gifted to me by my elder brother. I wondered what was it in the cover that drove him the instinct to present it to me, Its only after these many years, I truly understand what he was trying to say by the medium of this book to his 19 year old rash aggressive and over ambitious brother.

This book carefully makes you enter the shoes of the lead protagonist Jason, as he is a reflection of the practical immensely indifferent person that rests in a lot many of us. As his transformation along the course of chapters takes place, step by step while he carefully understands bigger meaning to words like love, friendship, family and work, so does an unintentional yet necessary soul search start within every reader's heart. This book shows that how legacy is more then just a transfer of wealth or property, but much more then that.
The values and lessons of life set forth in this book are so much more important and meaningful, and they are the ones needed to be passed on from one generation to another. If you care about your loved ones, if you care about how you are remembered, this book will make you think about the kind of legacy you want to leave to your family, your friends, or even to the world – before it is too late. I must say that reading it had been time and again, a great experience and judging by the stature of the great man who wrote it, no wonder that this turned out to be a masterpiece.

One example of how the lessons are learned by Jason, is when Jason must take 1500 dollars he earned when working during the first month, and the second month has to give it away to people who it will really make a difference in their lives. Jason is a playboy and has easily dropped 1500 dollars before partying with his friends, so he has no real concept of how money can make a difference in someone's life.
He finds an old woman whose husband can't afford his cardiac medication, and by giving her 200 dollars he is able to buy 3 months worth and really make a critical difference in their lives. He also helps a young mother who is about to have her car repossessed by paying the last 400 dollars on her loan. Through this lesson, as he spends the 1500 dollars he comes to the realization that money, when used properly, can have a huge impact for good in someone's life.

RATING - 4.5/5. Read this book and pass it on to the young people in your life. These life principles apply to people of any age, and the younger they are learned the more they impact our lives.

PS - I saw the film adaptation about 10 months back, Its no match for the book, a complete led down on many fronts. I don't recommend it, but missing the book would be a mistake, it needs patient reading, and thus even after a slow start. It is important to hold onto it, that is how the best output can be obtained.