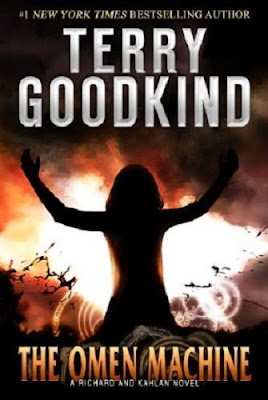 THE OMEN MACHINE
a RICHARD and KAHLAN novel
ISBN - 978-0-7653-2772-7
FIRST EDITION - August 2011
PAGES - 525
AUTHOR - Terry Goodkind
BEST-SELLERS - Wizards First Rule / Stone of Tears / Confessor
PRE-SCRIPT - Finally a Richard and Kahlan novel. Richard and Kahlan are the main characters of his epic fantasy saga 'Sword of Truth'. The saga spanned 11 novels and 1 novella. The novella 'Debt of Bones' is a prequel and is set before the happenings of the first novel 'Wizards First Rule'. The saga ended with Goodkind's final novel 'Confessor'.
The Omen Machine is a continuation as well as a beginning. You can start this as a standalone novel because i am sure the story will continue into many more books. Or I would suggest you to read the 'Sword of Truth' series as the characters are the same and at some point of reading this book, you will realise you do not have any clue of the previous happenings that are frequently mentioned. Few books, including the first one of 'Sword of Truth' is reviewed here, and you can check it out by clicking here
EXCERPT - Outside the Garden of Life hundreds of heavily armed guards filled the corridor in both directions. They all looked a great deal more edgy. Kahlan realised that they would have had to have heard the lightning hit the Garden of Life. The probably heard the glass roof breaking and falling as well. They undoubtedly wondered what in the world had been going on beyond the doors.
They might even have feared that it was an attack of magic of some sort, and so they were standing ready in case they were called upon to defend the palace.
She knew, though, that despite their worry, none of them, not even a Mord-Sith, would dare enter the Garden of Life while the Lord Rahl was inside unless he invited them in.
FL Speaks - Oh boy oh boy!!! You have no idea how excited i am. The Seeker is back! That means Cara is back too!!!! The book starts one day after the end of the final novel of 'Sword of Truth'. Cara is married to General Benjamin. (Yes, a Mord Sith marries for the first time. I just wish it wasn't Cara. She was mine!) The war is over, Richard and Kahlan prevail, D'Hara and Midlands are safe and everyone is invited to Cara's wedding reception.
And just like that, Boom!! PROPHECY!! The bane of Richard's existence is out to make life miserable for him. A blind woman's warning, a delirious child's feverish words and the fragmented sentences in a prophecy book suddenly says the same thing. And Richard Rahl and everyone knows, nothing is of coincidence. And as the fragile allies try to interfere with matters they don't understand, a sly ally makes plans for the capture and control of D'Hara.
Fast forward and we find a machine (of all things) talking to Richard. Now this was too much. Goodkind tries to go Terry Brooks' way by incorporating modern world with fantasy. Very less action and i was very disappointed not to see Richard the way Richard should be. A seeker, the bringer of death. No sword plays for him, no dance of death to witness. Goodkind tries to bring all the characters back into this one novel which falls a bit short on plot, number of pages and expectations. Other than Adie, Chase and Verna, almost all the characters are back. The sad part is no one actually has an important part.

Far in the Dark Lands, evil looms once again in the form of a powerful individual bent on revenge. And as the allies begin to break away and head over to enemy camp, Richard is running out of time to make sense of the riddles the machine pours out to him. With Kahlan a captive again, its upto him and his friends to fight the evil and rescue her. (okay, i had enough of putting Kahlan Amnell at risk. Seriously, from 'Chainfire' to 'Confessor', the final three books had less and less of Kahlan. Why Mr. Writer why?)
Anyway, this is a fresh start and a good continuation to the legends. Goodkind's writing is a bit rusty in this. Though his novels #5 to #7 have dragged and managed to make readers stop reading the saga, i am glad i continued because Goodkind gets the awesomeness back from 'Naked Empire'. There are a lot of questions left unanswered in this one which proved that THIS IS NOT A STANDALONE novel. We can expect a lot of Richard and Kahlan again. For huge 'Sword of Truth' fans like me, THIS IS A MUST READ. For new fantasy readers, welcome to the world of the SEEKER. You will love the ride.
My Rating - 3.5 stars. It will get better, mark my words.
PRICE - INR 1100/- from TOR publications (Hardback - 2011)
P.S| super happy to read the book within a week of being published :D
Posted by Freelancer at August 24, 2011
Email ThisBlogThis!Share to TwitterShare to FacebookShare to Pinterest
Labels: Freelancer, Series - Richard and Kahlan, Terry Goodkind