Message in a Bottle - Nicholas Sparks 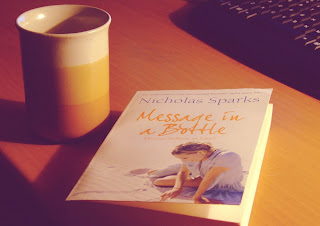 Message in a Bottle

Synopsis - When journalists Theresa Osborne finds this desperate message washed up on a Cape Code beach,it raises questions that intrigue her.Who is the author - A man called Garrett - and who is Catherine ? And what is that that has torn them apart ?
Theresa, wary of romance since her husband shattered her trust, finds herself unaccountably drawn to him and his secrets and embarks on a search that brings her to an unexpected confrontation...


Excerpt - She tipped the bottle upside-down and was surprised when the note dropped to the sand by her feet almost immediately. When she leaned over to pick it up, she noticed it was tightly bound, which was why it slid out so easily. She untied the yarn carefully, and the first thing that struck her as she unrolled the message was the paper. This was no child;s stationary. It was expensive paper, thick and sturdy, with a silhouette of a sailing ship embossed on the upper right corner.She caught herself holding her breath. Maybe it was old. Maybe she had a real artifact here.
Theresa found herself wondering about the man who wrote it - Garrette. The whole thing was strange, her reporter's instincts took over then, and she suddenly thought that the message not might mean anything. It could be someone who wanted to write a love letter but didn't have anyone to send it to. It could even have been sent by someone who got some sort of vicarious thrill by making lonely women cry on distant beaches.


Ereena speaks - Ok, So this is my first book review..I hope i live up to Freelancer's expectations :D
Do you believe in LOVE ? If you do, this book is a perfect blend of drama and romance! This book revolves around the story of Theresa Osborne,who finds a beautiful letter inside a bottle. Thrown to the waves and to fate, the bottle could have ended up anywhere. Instead, it was found just three weeks after it begins its journey. For Garrette, "The man who signs the letter, the message is the only way he knows to express his undying love for the women he has lost". Challenged by the mystery and pulled to find Garrette by emotions Theresa does not fully understand, she begins a search that takes her to sunlit coastal town and an unexpected confrontation. Brought together by chance or something more powerful, Theresa and Garrette are people whose lives are about to touch for a purpose, in a tale that resonates with our deepest hopes for finding that special someone and an everlasting love.

Shimmering with suspense and emotional intensity, Message in a bottle takes readers on a hunt for the truth about a man and his memories and about both, the heartbreaking fragility and enormous strength of LOVE. This book will have you weeping for the joy and the tragedy of it all, a page turner, achingly lovely novel of happenstance, desires and the choices that matter! After i finished the book, i cried a lot and the following days kept me thinking about book, it moved me completely. A must read :)