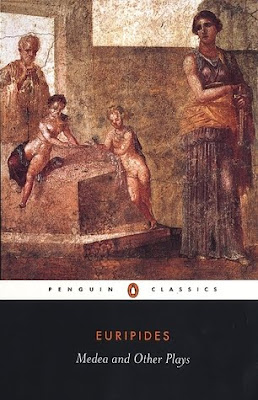 NAME OF THE BOOK: Medea and Other Plays

1st PUBLISHED: This translation was first published in 1996 as “Alcestis and Other Plays”

SYNOPSIS:“Medea’’, in which a spurned woman takes revenge upon her lover in the most horrifying manner, is one of the most shocking of all the Greek tragedies. Medea is a towering figure who demonstrates Euripides’ unusual willingness to give voice to a woman’s case. Medea, a ‘barbarian’ princess and sorceress has been forced into exile with a husband who later deserts her for another woman. The play charts out the emotional transformation in Medea; a progression from suicidal despair to sadistic fury.

EXCERPT:“Watch out for that savage temperament of hers, that stubborn will and unforgiving nature! It’s clear that this anger of hers will grow; soon enough her grief will be kindled by it and burst in storm.

What action will she take then, that proud, impassioned soul, so ungovernable now that she has felt the sting of injustice?”

ARPITA SPEAKS:
This particular play in the collection of various works by Euripides is by far the best. The unbelievable conclusion haunts one’s thoughts long after the play has ended, and compels the readers to question their own notions of justice and vengeance.

The husband of our protagonist (the so-called ‘hero’), Jason was sent on a apparently hopeless quest for the golden fleece by his usurper uncle Pelias. In the ship “Argo” he journeyed through dangerous waters to Colchis on the Black Sea, where Medea, daughter of the king, fell in love with him and aided him in winning the fleece.

He returned successfully to Greece with Medea, who then tricked Pelias’ daughters into killing their father in the futile hope that Medea’s spells would revive him. As a result of this carnage both Jason and Medea had to live in exile in Corinth; at this point the play’s story begins.

In this foreign land, Medea finds herself abandoned by her husband who has married the daughter of the king of Corinth in order to improve his station. Medea is shattered and overwhelmed by an equal measure of grief, and rage at Jason’s betrayal. Having killed her own brother in an attempt to avoid pursuit as they fled Colchis, Medea lost the only refuge she could have sought in such dire straits- her motherland.

Jason’s betrayal after so much of sacrifice on her part seems to Medea to be the grossest offence. However, Jason defends his actions by deliberately pointing out that his marriage to the king’s daughter would secure the future of their sons and tells Medea that she ought to be grateful for his noble decision. The greatest difference between the two is that Medea is aware of the horror of her evil actions and accepts them with dignity, while Jason- the fortune seeking coward that he is- pretends that his decision arose from his concern for his wife and children.

As Medea avenges Jason’s betrayal in the worst possible manner, one is torn between feelings of horror, disbelief and awe. She avenges for herself and as an agent of the divine retribution of a sacred law- the law of marriage. Wrong a woman in love and nothing in the world can have a heart more murderous: Medea, like all traditional heroes, is driven by a sense of honor and god-like wrath.


PS- Just in case you’re wondering, she does not kill Jason.