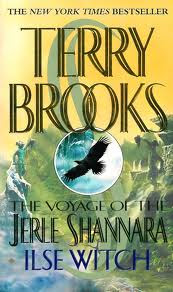 ISLE WITCH
Book 1 of 'The Voyage of Jerle Shannara' Trilogy

SYNOPSIS - When the body of a half-drowned elf is found floating in the seas of the Blue Divide, an old mystery resurfaces. Thirty years ago, the elven prince Kael Elessedil led an expedition in  search of a legendary magic said to be more ancient, more powerful, than any in the world. None of those who set out on that ill-starred voyage ever returned....until now. For the rescued elf carries a map covered with mysterious symbols only one man can decipher. That man is Walker Boh, the last of the Druids. Walker must lead a quest to discover the lost magic and claim it on behalf of the races before it can fall into the hands of those who might misuse it.

EXCERPT - "Listen to me," Ryer Ord Star intoned softly. "Listen to what I have seen in my dreams. You will make your voyage across the Blue Divide in search of something precious - more to you than to any who go with you. Those who accompany you will be both brave and strong of heart, but only some will return. One will save your life. One will try to take it. One will love you unconditionally. One will hate you with unmatched passion. One will lead you astray. One will bring you back again. I have seen all this in my dreams, and I am meant to see more. I am meant to be your eyes, Walker. We are bound as one. Take me with you. You must."

FL Speak - Sensational. Its been so long that i almost forgot how exciting Terry Brook's writings are. The legend of Shannara comes back to life with this book. Non-stop action. This is what Brook's doesn't best. Action and adventure in a fantasy realm. Less politics, infact its almost nil here. This is Pirates of the Caribbean set in the fantasy world.

The book starts with an elf floating half dead in the Blue Divide. [ever since Lord of the Rings, this is where i have loved the portrayal of elves. The elves are a strong race here and one of the most important.] The half-dead elf is rescued by a Wing Rider (elves on giant birds called Rocs, who patrol the elven territorial waters). He finds the castaway blind, his tongue ripped apart forcibly and with him a bracelet belonging to the royal family of the Elves and an unknown map. The Elven King sends the map to the last Druid, who accepts to help the king only if he accepts the terms set by the Druid himself, paramount of which is assembling a council at Paranor, which has to be an autonomous body, working for the future of the Four Lands. The druid, Walker, assembles his own little team, that involved a dwarf, a spirit creature, and two young boys. One of whom was the direct descendant of the House of Leah carrying the famous Sword of Leah and the other, his cousin, Bek Lowe.

Meanwhile, spies inform the ILSE Witch about the castaway and the hunt for the treasure begins. She is almost as powerful as the Druid and that is a case of concern for the brave band of elven soldiers and the Rovers that make up the expedition trip. And thus begins an extraordinary journey in search of three keys that will unlock the source of power believed to be from even before the Great Wars began. The search leads them to treacherous islands, where magic is stronger than him and more evil. The journey tests their skills to the utmost, loyalties and tolerances snapped like threads and betrayal is at the foremost. This is the time when old, powerful legends comes alive. This is where Bek Lowe, the young boy learns of his origins. And the truth, may be too much for him to handle. Ahead, a dark powerful entity waits for them and from behind, the Isle Witch hunts them. With time running out, Walker and his group has to be at the best to survive certain death.

Exhilarating. Fantastic piece of writing by Brooks. This is why i picked him up at the first place. The Sword of Shannara set the benchmark for fantasy and this book doesn't disappoint. Terry Brook's lovers will automatically read this. New to Shannara people can read it even without reading the Shannara and the Heritage of Shannara series.