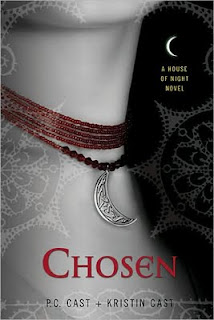 SYNOPSIS: Like life wasn't complicated enough being the only Vampyre-fledgling in the history to have a colored in and expanded tattoo, plus the ability to invoke all the five elements, Zoey Redbird now walks on the tramp chick land. Meaning? She has three boyfriends.Three! Heath Luck: Human Ex-Boyfriend. Erik Knight: Current Oh-So-Hot Vampyre Boyfriend and the Disastrous of all - Loren Blake: Vampyre Poet Laureate who is also 17 year old Zoey's 21 year Old Professor (Yikes!!) Add to this mixture of romantic (slutty?) triangle a dash of scary dead-undead best friend Stevie Rae, Evil Bitch (with nails and green eyes) Neferet, the killings that mar the House of Night...and you have the perfect recipe for a Vampyre Apocalypse.


"Believe in yourself, Daughter and get ready for what is to come"
Yes, the Goddess still reminds Zoey of the reasons for which she was Marked but well, Zoey is trying to figure out Stuff (Really? How bad could grammar get?) whether her enemies are her friends or vice-versa, whether she is turning into a ho (?) and whether she really is the Chosen one.
EXCERPT: "Well Nala, seems I'm in middle of some deep poo (Haha! Poo?). The negatives in my life totally outweigh the positives, and you know what's weird? I'm starting to actually get used to it. Nala sneezed directly in my face, making me laugh while I said "eww" and hurried into my room, going for the box of Kleenex I kept on my bedside table. As usual, Nala summed up my life perfectly: kinda funny, kinda gross, and more than kinda messy."
MSM Speaks:  In Chosen, Zoey learns that Power alters people. People around them and themselves. Zoey has unearthed the secret of her dead-now undead best friend Stevie Rae and has no choice but to hide all of it for the best of her friends. All good till here. The Story gets messed up when Zoey starts on with Erik, Heath and Loren Blake (Who is her teacher for God's Sake!). Aphrodite is gifted with the affinity for earth and she is the only one with her head on her shoulders, who is supporting Zoey. Later, towards the end of the book, Zoey's friends are pissed at her because she hides issues from them, Erik breaks up with her because he walks in when Zoey is in compromising position with Loren Blake. And Heath loses Zoey because she imprints with Loren. Enough with Melodrama already! Okay, so you all may have guessed that I am not so impressed with the Third Installment in the House of Night Series. Not because I do not like the Series per se, but I dislike the repetitiveness in this book. The language is screwed up with words like 'gihugic, ginormic, ho (Short for a whore) etc.' which shows the Authors' desperate attempt to sound like a teen. Really, a teen with huge super powers and a growing sense of responsibility through the 1st and 2nd books - Marked and Betrayed - should not become an idiot by the third one.
What happened to Stevie Rae? What happened to the concept of best friend I always believed in? What happened to the whole reason why Zoey is Marked and Betrayed? I am disappointed. Zoey making mistakes as a conflicted teen is justified as she also evolves as an independent and mature person in first two books. However, in Chosen she degrades as a selfish, insecure and confused teen.This is seriously moronic and hypocritical, especially when first two books set a different foundation. The Authors' fail to keep up the strong image of Zoey in this one. A downhill from the first two installments. I understand that the Authors are trying to draw a parallel between teen issues and superpower issues, but they push it a tad bit too far in an attempt to make it look normal. It.Is.Not.Normal.To.Have.Three.Boyfriends. Period. Chosen however brings out the better side of Zoey's enemy-turned-friend Aphrodite's better side which I really love. She has a clear sense of judgment which Zoey lacks in this book. Overemphasis on one issue (yes, I am not saying it again) spoils it for me. I know that sleeping around shouldn't be judged but some of Zoey's actions (literally) made me blush (with shame). Even I wasn't that stupid when I was a teen.
However, Chosen is a good read (I am not evil ;) ) in some parts when Zoey and Aphrodite discover the friendship. That, Stevie Rae's humanity is not lost completely and there's hope that it could be restored, makes the novel slightly positive. Also, discovery by Zoey that Neferet is her Nemesis makes me feel scared and intrigued and edgy at the same time - the feelings I loved. But I do not want to be Chosen if it means making out with three guys and losing my head - completely defeating the purpose of being the beloved of Goddess Nyx.
Keep reading for more reviews on House of Night, people. Your suggestions are welcome! :)
House of Night (Book Three): Chosen @St. Martin's 2008 ISBN: 0312360304
Landmark bookstore in Bangalore: ISBN : 9780312360306 Publisher: St. Martin's Griffin
List Price: 428/- INR.
Posted by Wings of Harmony at August 06, 2011
Email ThisBlogThis!Share to TwitterShare to FacebookShare to Pinterest
Labels: Fantasy, MSM, P.C Cast and Kristin Cast, Series - House of Night