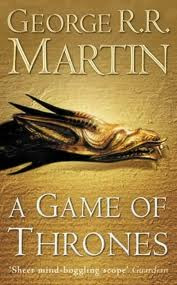 BEST-SELLERS - 'A Song of Fire and Ice' series

SYNOPSIS - As Warden of the north, Lord Eddard Stark counts it a curse when King Robert bestows on him the office of the Hand. His honour weighs him down at court where a true man does what he will, not what he must ..... and a dead enemy is a thing of beauty. The old Gods have no power in the south, Stark's family is split and there is treachery at court. Worse, a vengeance-mad boy has grown to maturity in exile in the Free Cities beyond the sea. Heir to the mad Dragon King deposed by Robert, he claims the Iron Throne.

EXCERPT - For a moment, Eddard Stark was filled with a terrible sense of foreboding. This was his place, here in the north. He looked at the stone figures all around them, breathed deep in the chill silence of the crypt. He could feel the eyes of the dead. They were all listening, he knew. And winter was coming.

FL Speaks - It begins with an execution. A deserter of the Wall is captured by the guards of Winterfell and brought to the Lord of Winterfell, Lord Stark. As is the punishment for every deserter, Lord Stark beheads him. The starting was enough to keep me glued, though with a few mediocre chapters in between. This book revolves around the Starks of Winterfell. And among the huge family, the stories of Jon (the bastard son of Stark) and Arya (the youngest daughter) are the most fun to read. As they return to the castle, they find a litter of direwolves on their way. Since direvolves are the symbol of House Stark, he lets his sons and daughters keep them as pets.

The King's right hand man is dead. So King Robert travels down to with his whole family to Winterfell to offer Lord Stark the title. Stark and Roberts were friends and it was Stark who helped Robert get the crown after they defeated the last king. Now Roberts wants him at his side to rule the seven kingdoms. Meanwhile, Lady Stark recieves a message from her sister which implied the Lannisters (the queen's family) is behind the death of her husband, Arryn, the last Hand of the King.

One good thing about this book is that it has no singular main character. Though the Starks are prominent here, other character stories are important as you will realise the plot goes much beyond the first book. After the suspicious accident of one of Stark's younger son, which left him comatose, Stark agrees to go with the king to find the truth about the death of his friend, Arryn. Fast forward to a few chapters and we find, Stark's eldest daughter bethroed to Robert's youngest son. Stark soon finds out the Robert's child Joffrey is actually the son of the queen Cersei and her brother, Jaime Lannister (yeah, incest!!). At King's Landing, Eddard assumes the duties of the Hand, as Robert has become dissolute and uninterested in ruling. Angry that Catelyn has abducted Tyrion, (who Lady Stark suspected had a hand in the aaccident of her son) Jaime and his men confront Eddard and the Stark men on the streets of Kings Landing, leaving Eddard injured but killing his Stark men. Jaime flees Kings Landing and Eddard's authority as Hand of the King. As a gesture of mercy for Cersei's children, Eddard meets privately with Cersei and warns her to flee before he tells Robert, but Robert is killed on a hunt before Eddard can tell him. King Robert is killed by a boar when he went on a hunting trip and before he could prove it was the Queen's doing, Stark is betrayed and named a traitor.

The book gets exciting after this. Joffrey is named king and he orders Stark to be beheaded. That came as a shock to me. I kind of hoped Stark would escape with or without his children and stage a fightback. Maybe that's why i am not a writer. As news of Stark's execution travelled, Robb Stark, unites the banners of his allies and rides to war against the Lannisters. Soon, with a bold plan he manages to defeat one host of the Lannister's armies and captures Jamie. Robert's two elder brother's wages war against the Lannister's separately and none of them is pleased with the other's claim to the throne and they both proclaim themselves the rightful king. Meanwhile Robb Stark's allies decides to swear fealty to Robb and proclaims him the King of the North.

Far away in the north, a terror is spreading. Jon leaves Winterfell to join the Night's Watch. After hearing the news of his father's death, he flees to aid his half-brother but is called back by his friends of the Watch. A dark powerful enemy is moving from the north and of the Night's Watch falls, the whole realm will forever be lost regardless of who's the ruler.

Far beyond the sea, Viserys and his sister, Daenerys, are on the run. Viserys is the son of the dead king of the Dragons. Viserys arranges to sell his sister in marriage to Khal Drogo, warlord of nomadic Dothraki horse warriors, planning to use Drogo's army to reclaim the Iron Throne of Westeros for House Targaryen. Among the wedding gifts are three petrified dragon eggs. A knight exiled from Westeros, Ser Jorah Mormont, joins Viserys as an advisor. Unexpectedly, Daenerys finds trust and love with her barbaric husband, and they conceive a child who is prophesied to unite and rule the Dothraki. Drogo shows little interest in conquering Westeros, which provokes the temperamental Viserys to lash out at his sister. Initially, Drogo endures Viserys and punishes his outbursts with public humiliation. But when Viserys publicly threatens Daenerys, Drogo executes him by pouring a pot of molten gold over his head.

I loved the scene because honestly speaking, Viserys was a pain in the ass. And it was somewhat satisfying to see him screaming in the end. Later, Drogo is wounded and lies in a vegetative state and Daeneryes takes pity on him and smothers him. The Dothraki abandons them after their leader fell. Dany burns Drogo's body in a pyre and places the three dragon eggs over them. And as she walks into the burning flame, instead of being burnt to ashes, she returns with three dragon hatchlings. The remaining Dothraki swear their allegiance to the mother of the world's only living dragons as they prepare to gather an army to take back the seven kingdoms.

Phew!! Looking forward for the next part eagerly. It would be fun to see how destiny changes the lives of Jon and Robb and Arya as the battle horn sounds deep into the night.
My Rating - 4 out of 5. Can get better
PRICE - INR 399/- by Harper Publications (Paperback - 2011)
P.S| An HBO orginal series consisting of 10 episodes were aired in 2010-11 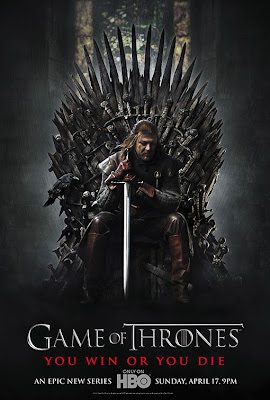 Posted by Freelancer at August 06, 2011
Email ThisBlogThis!Share to TwitterShare to FacebookShare to Pinterest
Labels: Fantasy, Freelancer, George R.R Martin, Series - A Song of Ice and Fire