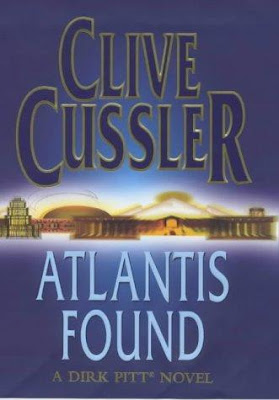 SYNOPSIS - Around the world, ancient artifacts are suddenly appearing, hinting at a catastrophe that will soon visit Earth.

Dirk Pitt is on hand at a Colorado archaeological site where an ancient and mysterious artifact has been found - one that is perhaps linked to other strange objects turning up across the globe. And soon Pitt's skills and ingenuity are desperately needed to rescue the team after a suspicious explosion seals them deep underground.

It quickly becomes clear that the artifacts carry a message: a warning of global Armageddon. Yet a shadowy organisation called the Fourth Empire not only wants to stop others from heeding that warning, but is also actively seeking to accelerate the end it foretells. Now Pitt and NUMA must face the diabolical foe, who will stop at nothing to wipe out all life on earth....

EXCERPT - Pitt silently moved from the bore, any sounds of his footsteps covered by the soft popping from the exhaust, and crept up behind the rider still sitting on his bike, who was distracted by the conversation. Pitt was no stranger to killing, but it wasn't in him to knife another victim in the back, no matter how rotten the victim might be. In the same motion, he reversed the grip of the knife an plunged the blunt hilt with all his strength against the base of the biker's neck below the helmet.

FL Speaks - DIRK PITT is back!!! For those of you, who still do NOT know DIRK PITT. He's the modern Indiana Jones and Lara Craft rolled into one. He loves the water and is currently the head of NUMA [National Underwater and Marine Agency] of the United States (When did he become the head??:O Looks like i have to read the earlier novels) Anyway, a mysterious glass obsidian is found in an archaeological site. Luckily Pitt and his crew were nearby and they managed to fight off a group of raiders. Upon research, they find out that the artifact has a twin. The owner of the other artifact reveals that it was found in the ruins of a ship in a remote island in the south of Indian Ocean.

Pitt's buddies, Rudi Gunn and Al Giordiono packs their bags in search of the island. As predicted, the bad guys were there waiting for them. Bam-whoosh-kick, and we can all breathe easily. The bad guys are beaten. Dirk however is far away in the Antarctic investigating a shipwreck of the 1770's. What follows is utter chaos and (utter disbilief on my part), a German U-boat chasing him. The submarine long thought to be MIA during Hitler's regime is now a part of the Fourth Empire. Dirk however manages to call the US Navy and they torpedo that U-boat to smithereens.

Back in Washington, Dirk finds someone stealing files from NUMA HQ. More chase ensures and like all heroes, though battered and tired, Dirk finally captures the thief. From the information gathered from the two artifacts, the team learns that during the Ice Age, a comet crash landed on Earth and almost wiped out a civilisation. What Dirk and NUMA realised later, that the comet had a twin. (SERIOUSLY??? Now we have extra-planetary siblings angry at dear Earth.) Prophecy says it was going to hit earth. But after all the calculations and mumbo-jumbo, the prophecy turns out to be false. The Fourth Empire has built four ships, like i mean mega-ships to survive the impending doom. (Remember 2012? Yeah, thought so) Dirk and team gather information about a certain nanotech facility way over in Antarctica. Apparently the Fourth Empire has plans of cutting off a huge portion of ice slab to drown the human race while only they and their selected few survive (yes, Hitler's men after all).

How would they achieve it??? Cussler knows the exact answer. POLE SHIFT THEORY people!! Yes, now you look exactly like i did when i read it. Anyway, i have linked it properly for you. Just click on the link and voila!

Coming back to the story, Pitt crashes all the evil plans and the nanotech station is destroyed. Then comes the confrontation with the Head of Fourth Empire and more chases and a police lock-up. Now that was epic! The policeman got the shock of their lives when POTUS, himself rang to release him.

Done! Another classic Dirk Pitt story. Another action-packed Clive Cussler plot. Dirk Pitt is maturing and growing older at the same time and i wonder how long will Cussler continue, though he looks good for another 10-15 books. Adventure books are awesome, specially those written by Cussler because there is hardly a dull moment. Who can ever forget SAHARA??? His best work so far....Anyway, DIRK PITT still kicks ass!

PRICE - INR 299/- from Penguin Publications (Paperback - 2001)
P.S| This is the 15th Dirk Novel novel. Every Dirk Pitt novels can be read as a standalone
Posted by Freelancer at August 21, 2011
Email ThisBlogThis!Share to TwitterShare to FacebookShare to Pinterest
Labels: Adventure, Clive Cussler, Freelancer, Series - Dirk Pitt