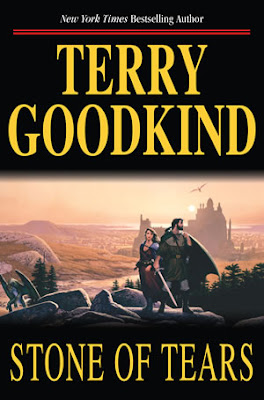 STONE OF TEARS
(Book Two of The Sword of Truth)

Read about Book One ----> Here <----
AUTHOR - Terry Goodkind
BEST-SELLERS - Wizard's First Rule
SYNOPSIS - In denying his heritage, Richard Cypher, grandson of the last true wizard, ignores the Wizard's Second Rule. It may be his undoing and the Lands'. One person - Kahlan Amnell, Mother Confessor- holds the power to make Richard accept what he hates. To save her people, her world, and Richard, from the Keeper of the Underworld she must sacrifice everything she holds dear and begin a war she knows can only end in death.
Wizard's Second Rule - "The greatest harm can result from the best intentions."


"Kindness and good intentions can be an insidious path to destruction. Sometimes doing what seems right is wrong, and can cause harm. The only counter to it is knowledge, wisdom, forethought, and understanding the First Rule. Even then, that is not always enough."
EXCERPT - Leather clad men fell to their knees, dropping their swords, pressing prayerful hands together. They held those hands up to her. They wailed for protection. They called for her mercy. They cried for forgiveness. Had they been sober, she wondered, would the illusion be son convincing? As it was, the effect was apocalyptic.
'We grant no quarter!'
FL Speak - Stone of Tears continues the adventure of Richard Cypher, the true Seeker in 1000 years to hold the Sword of Truth. Book one revolved around the adventures of woodsman Richard learning that he is the first true Seeker....from battling D'haran soldiers to falling in love with Kahlan to fulfilling the prophecies by defeating Darken Rahl, who happened to be his bastard father. It becomes clear that by mastering the wizard's first rule and using the boxes of power, Richard made a fatal mistake. He violated the wizard's second rule and tore the veil between the world of living and the dead.
in Tears of Stone, Richard is forced to separate from first wizard Zedd and Kahlan, as the gift in him threatens to kill him...meanwhile Zedd is attacked by creatures of the underworld as the Keeper readies himself to come out of the veil. Kahlan Amnell, Mother Confessor, ruler of the Midlands is forced to start a war that would be the fall of the Wizard's race and commence the Dark Ages. With time against him, the Seeker must put the Keeper in its place, tackle the spirits of Darken Rahl, learn to control the gift and save Kahlan....before it is too late.
A fantastic continuation to the Wizard's First Rule. The mistakes Goodkind made in the first book is not repeated, which is good as i have high hopes on this epic saga. The one thing that irritates me most about the book is that Goodkind tries too hard to impress the reader by explaining in detail about certain things twice or thrice. Nevertheless, this is a stunning story, full of action, suspense and sorcer. Cara makes her debut appearance in this book. Her comic relief is as outstanding as her looks. Goodkind has instilled valuable morals within the series and its good to see the characters show the readers by their actions. Richard Cypher aka Richard Rahl is on the way to be a legend.