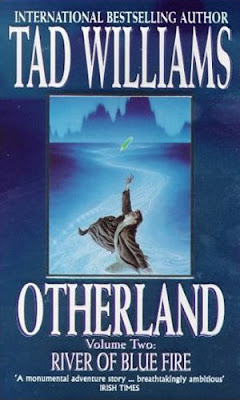 BEST-SELLERS - City of Golden Shadow (Book one of OTHERLAND)

SYNOPSIS - Otherland is civilization's most stunning achievement: a private, multi-dimensional universe built over two generations by the greatest minds of the twenty-first century. But this most exclusive of places is also a jealously guarded secret, created and controlled by the Grail Brotherhood, a private cartel known to few and made up of the world's most powerful and ruthless individuals.

The purpose of Otherland is still a mystery. But it may not remain for so long. For a small band of adventurers has penetrated the secrecy that surrounds it and has broken into the amazing world within worlds it contains. However, with one among their number determined to ensure that no one lives long enough to reveal the truth about Otherland, an extraordinary quest soon becomes a desperate race against time.

EXCERPT - A short distance from them lay a small tree which had fallen some time in the past and been partly subsumed by the forest floor, so that the gray-brown of its bark showed in only a few places through the moss and the grasses that had grown over it. From Renie's and !Xabbu's perspective, it was as tall and long as line of hills.

The Eticon army had reached the top of the log...

FL Speak - Tad Williams continues his saga with another huge continuation. The unlikely band of people finally find the golden city only to realise that their troubles have just started. They realised that they cannot log out and are stuck in a virtual reality world where pain is real and if you die, you just dont get out of the server, you die in your own body as well. And chasing them are the Brotherhood.

The group gets split up and they are all told to search for a man called Jonas who might be in any of the vivid worlds out there. As Gardiner and Fredericks get thrown into a world where the world is a huge kitchen, Renie and Xabbu stumble into a world where insects are ten times larger than them. The trouble begins when none of them realises that one among the group of nine is a killer who has his/her own motives.
Tad Williams delivers another gem of a novel with twists and turns and wild imagination. None of the stories loops tend to get boring. Except maybe for the character of !Xabbu who is reduced to repeat his tribe's mythical stories. I would have liked it a bit more if they made Gardiner more stronger but nevertheless i love his character the most. By the end of first book, it has become clear that the Grail Brotherhood is the reason kids are dying or going into comas in the real world.
Its a stunning continuation and it ends in a cliffhanger. What the readers must realise is that its not 4 books. Its one huge story, divided into four parts. As the characters jump from one scenario to another, you cannot but feel their pain and share their laughter as they struggle to find a way to stop the madness.
This is writing at its best. This is a must-buy series. A must buy!
My Rating - 4 out of 5. i guess i rated the first book too less. This is going to be one of the best series ever.