The Girl Who Played With Fire - Larsson 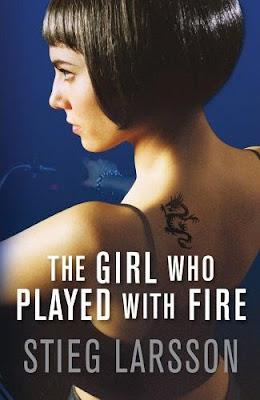 SYNOPSIS - The Millenium publisher has launched the most explosive and far-reaching expose of the multi-billion kronor sex-trafficking industry in Sweden, and its international links.

EXCERPT - She was listening to the sound of footsteps, which would mean he was coming. She had no idea how late at night it was, but she sensed that it was getting too late for him to visit her. A sudden vibration in the bed made her open her eyes. It was as if a machine of some sort had started up somewhere in the building. After a few seconds, she was no longer sure whether she was imagining it.

She marked off another day in her head.
It was the fourty-third day of her imprisonment.
FL Speaks - Lisbeth is back. If you still haven't read the first book, go read it now. I mean like now. Larsson has created an impossible character out of Lisbeth. Lisbeth Salander is a socially awkward girl who keeps to herself. She has a history of one of the most troubled and painful childhood. She is someone who has a photographic memory, is an expert hacker with a definite ethical code yet separates herself from her own emotions. And in this book, she is chased by police and killers alike for murders she didn't commit.

The book reveals more of her past, the details of her childhood, the abuses she had to go through. It also shows no matter how hard life comes at her, she is not the one to back down. The beginning of the book shows that she's a lot richer and enjoys her time in the Caribbean while searching for info for her cases. As she returns to Stockholm, three murders occur in one night, the only link between them is Salander and the chase begins.

Only Blomkvist is her ally but Lisbeth is determined to stay away from his life. Blomkvist decides to look for other motives and links for the murders with the belief that Lisbeth is truly innocent. As Blomkvist and the his publication house race against time to prove her innocence, Salander is determined to go after the real killers with or without any backup.
And in that chase, she comes face to face with her past.

Epic sequel to the mega best-seller, Larsson just threw it out of the park. Thriller, people, has just raised its bar, once more. It just keeps getting better.
My rating - 4.8 out of 5.