The Girl Who Kicked the Hornet's Nest - Larsson 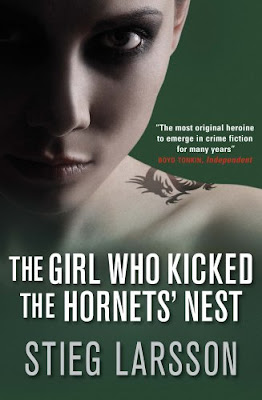 Lisbeth Salander, outsider and apparent enemy of society, is charged with attempted murder. In addition, the state has determined that she is mentally unstable and should be locked away in an institution once again.


The Enemy :
Pulling the strings behind the state's prosecution is the inner circle of the Swedish security police. Only with Blomkvist's help can Salander avoid the fate they have decided for her and expose the secrets they are protecting.


The Girl Who Kicked the Hornet's Nest :
Lisbeth Salander has been abused by a system supposedly designed to protect. Andd yet she is one person whose intransigence and limitless bloody-mindedness can provoke the disruption of the Swedish secret state.

"Sorry, I wasn't listening."
"It's her."
"What do you mean?"
"Its Lisbeth Salander. The girl they've been hunting for the past few weeks, for the triple murder in Stockholm."
FL Speak - Brilliant. There is said it. The story of Lisbeth Salander finally comes to an end with this book. This book is even better than the last two. And that is a feat.

By the end of volume two, we find Lisbeth finally cornering Zalachenko only to realise he's her father. Before she could bring him to justice, Zalachenko almost manages to kill her. Lisbeth is fatally wounded in the process but manages to would her father too.
Some of the Swedish police are after her life to protect Cold War secrets with Zalachenko. The manage to kill him in the hospital but Lisbeth survives, thanks to Blomkvist's sister who comes to help her as her lawyer.
The past finally comes out in full force in this volume. Lisbeth finally opens up to society even as they try to declare her mentally unstable. This is a courageos fight to maintain her integrity, her freedom as Blomkvist and his editor's rush to find the real killers. This is the final volume as you all know. And you can be sure that it is better than before. This is the final piece of the puzzle of Salander's past as a troubled child. No matter how vehemently the odds are stacked against her, somehow she never quits. This is the story of the awkward, shy, difficult yet exceptionally brilliant women whom the society has decided to forsake for the better of the society even without knowing her or given a chance to be represented. This is Lisbeth fighting way in the only way she knows best. This is her glory.
The end is as exciting as fast paced as it can ever be. She is the girl who lived.
My Rating - 5 out of 5. Exceptional writing. A must have for your collection and a must-read.
Special thanks to Reg Keeland for translating the stories from Swedish to English. If not for him, we would not have had a gem of a series with us. Thank you.
PRICE - INR 650/- by MacLehose Press (Hardback - 2009)
Posted by Freelancer at July 15, 2011
Email ThisBlogThis!Share to TwitterShare to FacebookShare to Pinterest
Labels: Freelancer, Millennium Trilogy, Stieg Larsson, thriller