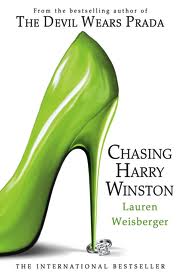 CHASING HARRY WINSTON: From the best selling author of The Devil Wears Prada which is now a motion picture by the same name featuring Meryl Streep and Anne Hathaway.
AUTHOR: Lauren Weisberger

BEST SELLERS: Lauren is best known for her first book, now movie - The Devil Wears Prada, Everyone Worth Knowing, Last Night At Chateu Marmont and other short stories. Chasing Harry Winston is Lauren's third novel.
*Disclaimer* This is a SERIOUS CHICK-LIT. Okay, you have been warned. If you still want to know more about it, you can read further.
SYNOPSIS: This book covers the lives of three soon-to-be 30 year old women who are best friends as well. Meet Best Friend no. 1. Leigh: Annoyingly perfect, with a perfect boyfriend who is as yummy as a chocolate bar - too sweet. She also suffers from Obsessive Compulsive Disorder. BF no. 2. Emmy: Newly dumped by an older guy who went after a 20-something chick. Emotional, Miss Goody-two-shoes, strictly monogamous. And last but not the least, meet BF no. 3. Adriana - Brazilian beauty has everything - I mean, daddy's money and men. All she wants is to get a Harry Winston on her ring finger before she turns 30. (I thought Harry Winston was a guy :P Actually the title is confusing. It's a brand of oh-so-sophisticated jewellery). And these three women are on a mission to do something drastic before they hit 30.
So what the hell is their problem after they turn 30? - you ask. Emmy wants to break the image of being monogamous and sleep with every man from every continent (Seriously?). Adriana wants to turn monogamous - ahem - get married to one man and settle down. And Leigh? Okay, she has a perfect man but  she is not in love with him and finds it in a very bad bad boy Jesse Chapman who is also a writer whose book she is editing. (Sorry readers - sometimes unbiased opinions become impossible. I kinda avoid reading such books - million others like them - but since I am a book worm - I can devour anything written. Sorry about that rant ;) )
"A few bad apples is no reason not to visit the orchard."
The girls (!) ultimately get what they want.
EXCERPT: "Leigh did what any sane female faced with such an e-mail would do: deleted it to resist the temptation of replying, cleared her trash to resist the temptation of recalling it, and then called tech support to restore all her recently deleted e-mails." (Check out the quotes here)
MSM Speaks: There's a reason that I dislike chick literature even though I am one - a chick that is. NO, you can still read it. Men - stay away. It's not good for you. So, I picked this book more out of curiosity - thinking that since The Devil Wears Prada is an entertaining movie, may be this would turn out to be nice. And I kinda like shoes. Lame I know - but fair enough. Unfortunately, all I could find out was that this was dreadfully similar to Sex and the City. Yes, I saw it. Jeez, I always thought women have better work other than shoes, men and diamonds.
Getting back to point - the story keeps revolving until the half of the book about how Leigh dislikes any kind of deviation from her routines, how Emmy cannot get over Duncan whom she dated for 5 freakin' years and how Adriana makes every man drool - sigh. I finished this book in two weeks! That's the longest time I have taken to read a 280 page book. Ultimately, they get drunk and resolute to do what they must do before they turn 30. Leigh realizes that she is attracted to her writer and does not love the man who proposed to her. Emmy sleeps with 4 men (I am not sure about the number) and finally finds the one. Adriana settles for a super popular rich Director Toby who gives her a Harry Winston (Kill me already!)
Do not pick this up if you don't like cheesy, mushy and girly stuff. Honestly, there are some good romance novels too, written by women which are FAR better than this. I may not be a writer, but I believe I have brains - sharp ones, which I do not want to fry over something like this. If you must, L.J.Smith, Richelle Mead etc. are some very good female writers who write really nicely. I think I have made a point here. This  book was panned by critics and was voted "#1 Worst Book of 2008" by Entertainment Weekly. True that.
On a positive note - if you are really depressed with your life and feel like dying - pick this up. It will make you laugh, if not for it's content - definitely for it's lameness and *rolling the eyes* moments. :D See, I am not that cruel. :P My rating: 2.5/5 only because it can actually lift your mood and make you realize that sometimes life shouldn't be taken too seriously. (I don't know what I said. But I am being generous).
You can know more about Lauren and her upcoming works ------->Here<-------
Chasing Harry Winston: HarperCollins Publishers 2008 (ISBN 978-0-00-728494-8)
Walden Bookstore, Hyderabad
Recommended Price: 195/- INR
PS: Readers, if you like chick literature, you must read this. I am biased but that doesn't mean you can't read it to see-it-yourself. It's actually better than those eroticas (hmmm.) Please do not hold this against me :P Beauty lies in the eyes of the beholder. :)
Posted by Wings of Harmony at July 22, 2011
Email ThisBlogThis!Share to TwitterShare to FacebookShare to Pinterest
Labels: Contemporary Romance, Lauren Weisberger, MSM